One highlight of recent trapping jobs was a colony I trapped along with my faithful trapping partner. It started with the free Az Humane Society clinic in early April where we met Don. He brought in 14 cats and indicated he had a LOT more to fix - an understatement. To top it off, while checking in at the clinic, one of the cats was giving birth in the trap! BTW this happens often as cats become stressed in the traps while waiting to be fixed. Often the kittens are born prematurely and do do not survive. Those kittens were lucky and went to foster with the mom cat and we began to make a plan to get the rest of the cats. Mom was later fixed and returned.

We went back the next night and caught eight more female cats with the drop-trap and made plans to do more as soon as possible. This was a desperate situation and needs help. With so many wanting assistance (because they waited too long to call and all the cats were now pregnant), we could not go back right away resulting in more kittens being born. We did another 36 cats on Dr. Kit's mobile and at N. Phoenix S/N Clinic on 4/22. After a long day at the clinic (not to mention having to aftercare 36 cats), I managed to go back to Don's that night and trapped another 16 cats for the next day. I was there after dark navigating the overwhelming hazards on the property. We got six more the next morning with the dropper and other one the following morning when releasing the second days crowd. This was a male requiring yet another round trip to S. Phoenix to release one male cat. With these seven more total of 82 cats were TNR'd at this colony.  We also rescued a total of 19 kittens for a total of 101 cats from this one colony. There are still about 10 cats left to fix so we will be back soon with the trusty drop-trap. It will be a challenged with 82 cats already fixed.

This job clearly demonstrated that there are challenges to trapping a big colony to make sure ALL the cats are fixed. This was clearly an example of someone who waited too long to do TNR. I might mention we also fixed seven dogs belonging to residents living on property and an additional two pet cats.

The following photos are highlights of this trapping job. 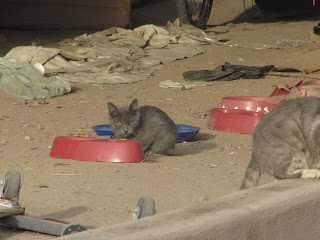 Waiting to be trapped and fixed 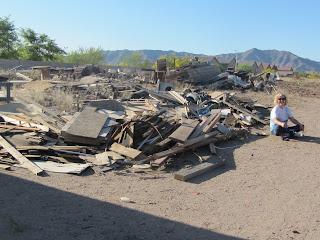 Great place for cats to breed and live...

It amazes me how young kittens such as this do so well and recover so quickly. These three went right to the food bowl upon release. 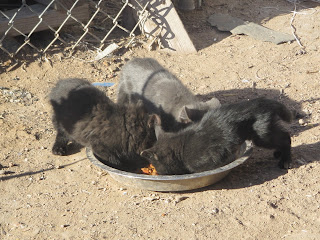 This guys were hungry but are now fixed...

The importance of TNR cannot he emphasized enough. The example above is just one many more similar situations we deal with routinely. In March I did 175 cats and in April, 152 cats. This does not include the pickup,transport, release and aftercare for numerous other caregivers. The 2013 kitten season is nearly over (it is now June), and as I say every year; "it was the worst kitten season ever". Perhaps it is because we had some alternatives for rescue not available in years past. As Summer begins we are now fixing kittens and soon it will be the teenagers - ALL whose births could have been prevented if action had been taken sooner...Now the voice mails say; "I have a mother cat and kittens in my shed".

I wish I had time to share the many other experiences and perhaps one day I will. I would like to share the experiences with the caregivers, not just the cats. Many are grateful and appreciative...others are demanding and think i am their personal slave. Yet somehow I keep going...It will be 10 years in November.

That know me know that I am focused on the problem and the solution. Having worked as an engineer for 26 years and solving difficult problems, I have spent a lot of time looking at the problem of "too many cats" and not enough homes for them. Recently I have concluded that stabilizing colonies is the solution, not fixing all the cats. So this is what I advocate and work on. Focusing on what I call "pods" of cats and preventing more "pods" from developing is what is needed. Preventing kittens from being born is important but it is even more important, when this cannot be prevented, to prevent new "pods" from forming. This happens when caregivers give away kittens without fixing them first. Followup is also important and a lot of time is spent on this task (i.e. making sure any new cats are fixed). It is also important to find these pods early to minimize the time and energy needed to stabilize that pod.

So what can you do? Get involved in your neighborhood working to keep your "pod under control. Think of  this concept of overlapping circles on a grid. There will always be truly feral cats out there but fed cats will ALL be spayed and neutered. It takes a serious commitment but is doable - I know because I have done it. I will close with my favorite quote about commitment and motivation: "Do or do not, there is no try" - Yoda from Star Wars

So go out there and make a difference in the lives of free-roaming cats...