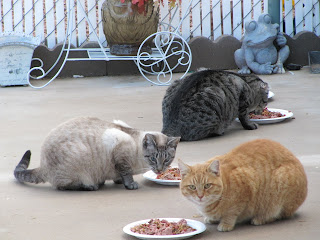 Again there were last minute cancellations for the Tempe clinic and Suzie and I had to scramble and find a couple of trapping jobs to fill the clinic. We settled on a couple jobs nearby so it would not be too hectic in the morning for picking up traps left out overnight. We ended up with ten cats from one place (eight that night and two overnight) and three from the other. (two that night and one overnight). These were people who really needed our help. I cannot emphasize enough how much financial assistance is needed for caregivers and cats.

We again had too many cats at the clinic and the vet could not fix four of the cats we had trapped - one from the group of ten, and none of the group of three. These would be going to the vet on Monday. One can never predict what the caregivers and cats will do. Since some of our cats were needed to fill the clinic (75 cats maximum), our efforts were not wasted.

We both worked at the clinic that day and I took the fixed cats home for aftercare along with the four awaiting surgery the next day. As I drove home I thought of the number of times I've driven home from the E. Valley clinics with cats in the last six years. Suzie set additional traps at both locations that night to try to snag stragglers. It is important to fix ALL the cats, especially the females, in a colony to fix the problem.


I received a call at 6:00 AM that the resort in central Phoenix had trapped another cat. I headed down there to pick up the cat along with the four carryovers from the day before that were stored in my garage with the already fixed cats. Suzie would be picking up a couple of strgglers at one of the trapping jobs form the day before. On the way to the first vet on the 51 freeway I started to hear a periodic clicking noise in the rear of my vehicle and its frequency changed as I increased and then decreased speed. When I got to the second vet I looked under the car thinking a plastic bag or some other debris was hanging from it - nothing. When I got home Bill looked at the tires as I rolled forward and voila! There was a quarter inch bolt with a washer embedded in the tire. Fortunately the tire had not gone flat or I'd have been stuck on the freeway with a carload of feral cats.

So, Bill and I loaded the nine fixed cats from Sunday into the Jeep and he helped me release them. We then drove to the tire store and fortunately they were able to fix the tire. In this business one cannot be without a reliable vehicle and regular maintenance is a must. Nothing could be worse than being stuck in the "back of beyond" or in an unsafe neighborhood at night with a load of cats on board. 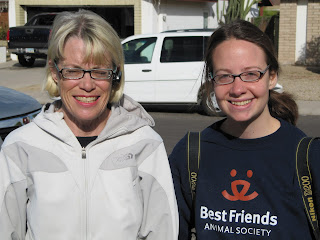 This was the week the Best Friends photographer was coming to Phoenix to get pictures for the article they are writing about us for their bi-monthly magazine. She was coming down today and would be in town through Wednesday. She was meeting me at my place at 5:00 PM to go trapping. We had a busy week planned. There would be only three days of vet appointments due to the Christmas holiday so we we'd be busy. It is important to fix cats before kitten season, not only to prevent kittens from being born but because it is less expensive to fix cats that are not pregnant. NOTE: It's time to start fixing cats before kitten season!


That night I had a 12 cat job planned. Fortuntely, I was able to get my vehicle with the new tires in time for her arrival. Molly, the photographer, met me at my house about 5:00 PM and we drove to a nearby residence to trap. The caregiver had trapped before and had confined most of the already fixed cats to cages and carriers (don't ask me how). This was one of those jobs where ALL the cats were caught within one hour. We caught a total of 13 cats. We left the eartipped cats in traps overnight and set traps before we left. Molly got some good photos but we started too late and lost the light. Tomorrow night we would need to start trapping earlier while there was still good light...


I ended up going to two vets in the morning and Molly met me at the second vet. I released the resort cat very early in the specified place. They had caught another cat but it turned out to be one of cats we had fixed last week. There were no more cats in traps at last night's location. I met Molly at the second clinic and introduced her to the vet who gave her the tour. Of course I thanked the vet for helping us day after day with these feral cats. Each morning when I am there, he comes in the back and asks in a happy voice,"How many do we have today?" We met back at my house to discuss the day's itinerary. I found out that she wanted photos during the day of eartipped cats. Knowing that most feral cats are usually hiding during the day, this seemed like a tall order. 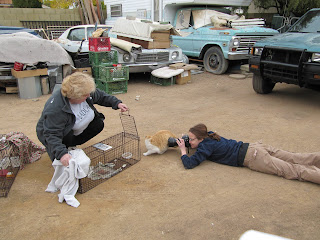 We loaded up the stragglers from Sunday and met Suzie to release the cats. She got some great photos of the release including one in this blog where the cat actually ran into the camera as it bolted from the trap!


After the second release we headed for Suzie's to hook up with Beth and John who were to wash traps for that night's trapping job. Beth and John are Best Friends volunteers and wanted to meet Molly and talk about their sanctuary. Meanwhile, Suzie and I got on the computer searching our database for a big previously trapped job nearby where cats might be out during the day. We found two places. After washing traps we all headed over to the first location and about ten cats were milling around. I had trapped over 30 cats there and they were ALL eartipped. This was a perfect place for her to take some great shots. From there she and Suzie headed over to a trailer park near 67th Ave. and Glendale where we had trapped over 90 cats in the past several years. This was nirvana for a feral cat photographer. I headed home as I also had traps to wash and cats to pick up at the vet that afternoon. We had a big trapping job that night for 20+ cats and Molly was to meet us there later in the afternoon. She spent most of afternoon at the trailer park.

I headed home to wash traps at my place and as I was about to cross I-17 at Thunderbird I got a call from the warehouse where I'd tried to drop-trap the big nasty tomcat. They had him in a trap. So I detoured south literally moving from the middle lane to the right turn lane to pick him up. It was 11:30 AM. I called the vet immediately and they agreed to take him late. So I headed back to the vet again (I was up to three trips there). I'd be back at both vets about 4:00 PM to pick up cats - a total of 14 cats. I then loaded up 17 traps and headed to that night's trapping job. Barbara and Suzie had met Molly there early and they were in high gear when I arrived. We ended up with 22 cats at this location. There would be no second night trapping due to the holiday, but we were confident we had caught them all. Still, one would never know in a neighorhood like this. There are so many unsterilzed animals is these low-income neighborhoods and without a conserted effort to mobilize the community - well, there will be more cats to fix. We also had a nice dinner with Molly while waiting for stragglers to go in the traps. A couple were caught overnight. All 22 went to a single vet the next day.

After taking the 22 cats to the vet in the AM we released the 14 cats the next morning and met Molly back at my house. The tomcat would go back later that morning. Molly planned to spend the day at the trailer park with the manager looking for great shots of eartipped cats. - before heading back to Kanab. She had a lot of great photos to choose from for the article. 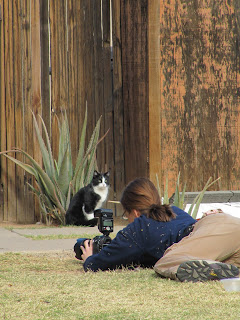 We released the 22 cats back in the AM and were done for the week except for lots more dirty traps and covers to wash. There were no vets open on Christmas Eve or that weekend due to the holiday.

Next week - New Year's trapping extraganza!
Posted by Pam at 8:01 AM