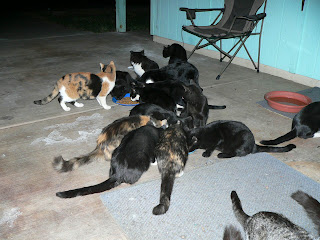 January 2011
The year started off with a bang as I was able to TNR 244 cats. As always, I feel like "The Red Queen", running as fast as I can to stay in place...all the while knowing kitten season is just around the corner. It always depresses me when I run into someone who says they are going to let a cat have kittens, negating my hard work to fix cats day after day. Let's face it, TNR is a difficult business. It requires back-breaking lifting and hauling not to mention long hours of waiting for cats to go into traps and cleaning and washing equipment. Still, one cannot ignore its importance and effectiveness. It is the most humane and effective method of stabilizing free-roaming cat populations.


Week of January 3rd
The first week of January began with trapping 23 cats that was to originally be a colony of 12 cats. Often caregivers underestimate the number of cats they feed. This large colony was fed by an elderly gentleman who could never have done TNRon his own. Overwhelmed, he at last found the Spay Neuter Hottline and we were able to help him. There is however, one left to fix and this will definitely require the drop-trap. These last cats, usually the "mother cat who started the problem", are often the last ones to be trapped. Frustrating! (I did go back at a later date and caught this cat).
Week of January 10th

During week two I helped an elderly lady in a mobile home park (MHP) trap two cats. I've been helping her for years and a few more cats had shown up. It is VERY important to monitor colonies for new cats. Later in the week Suzie, Grant and I tackled five colonies in the central Glendale area. This was again one of our "marathon" trapping extravaganzas. We trapped a total of 61 cats over two nights at five different locations. This required visits to several vets and a lot of driving from place to place trapping, then releasing cats. The last seven cats were released on Friday morning at three locations. Thanks go out to Suzie and Barbara for enduring a second night of rain to catch the remaining cats... 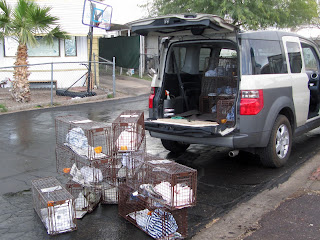 
Week of January 17th
The week started off with 23 cats left over from the Tempe clinic on Sunday that had to go to two vets on Monday. I trapped Sunday night for six cats and also had them at the vet on Monday along with this crowd. The job Sunday night was a "high end" trapping job. The caregiver was donating extra for immediate assistance - a way to make $$$ to help the less fortunate caregivers. I also drop-trapped a cat later on Monday morning at another location - one that I'd been after for a long time.


Monday night the caregivers from Mesa came to pick up their 20 cats at my place and I went drop-trapping again to catch the last cat at Sunday night's location. I had to lay down on their kitchen floor hiding beneath the bottom of the French door in the kitchen to hide before pulling the string on the wary tortie outside on the patio. But I snagged her after about half an hour. What a rush! After picking her up at the vet I was off to meet Suzie and Barbara to trap in a MHP up in N. Phoenix. It turned out there was one more calico that fed across the street. I'd be back there in February...


The manger of the MHP claimed there were 20+ cats but it turned out many were already fixed. A lady there had done 12 cats a while back and had even picked up traps from me. We had traps out at about five locations and ended up with 10 cats that night and one more overnight for a total of 11 cats. There would be no second night trapping at this location. That was good as we had to drop-trap early in the AM at a park in Glendale and I had to meet Alicia to help trap 20 cats at a lady's place in W. Phoenix. This one was very important...

A couple of weeks previously Channel 12 "Call for Action" had done a story about a lady needing help with feral cats. She had contacted the AHS and they wanted to charge her more than she could afford to take the cats to their facility and no TNRassistance was available from them. They did mention ADLA'sTNR program on the news as well. My friend Alicia saw the broadcast and called the reporter who put her in touch with the caregiver. She offered to help her TNR the cats and she was thrilled that someone cared enough to help her.


The park in Glendale - ADLA has an agreement with a Glendale park to trap cats there on a regular basis and there was one last cat under the office to snag. It was cold and dark but Suzie and I had him within minutes. After taking him to the vet I released the 11 cats from the day before at four locations in the MHP. I met Alicia and the caregiver with the 20 cats at the vet that morning. The caregiver was so happy she cried. These are the experiences one never forgets...


There would be little time to rest. The Sunday clinic in N. Phoenix was on 1/20 along with the Tempe clinic the same day. We were trapping a BIG job in the Coronado area in central Phoenix on Saturday night. This was one of those "low-hanging fruit" trapping jobs. Over two nights we trapped 46 cats total We were only able to do 16 on Sunday along with the other total of 70 cats. Thanks go out to all those dedicated Coronado folks for organizing TNR in their neighborhood and raising money to help the cats! Special thanks go out to Andrea Del Galdo who is the driving force behind this effort. And thanks go out also to Barbara and Stephanie for doing a second night's trapping at this location.


Week of January 24
Between the leftovers and the additional cats trapped on Sunday night we'd have 27 cats going to two vets on Monday. In the midst of releasing the cats fixed on Sunday I was diverted to a motel downtown where they had trapped two cats unexpectedly. I'd be at the vet again later in the morning with those cats for a total of 17 cats. All told there were 27 cats at that vet on Monday including other caregivers who were also trapping for that day. But the week was just beginning...


Tuesday all 27 cats would have to be released. I might mention that one cat had to have an eye removal requiring it to be kept in a rabbit cage for several days to adjust to its surroundings. We named him "pirate". I'd have to go back home after release and pick up a rabbit cage to take to the neighbor who would be fostering the cat in the cage. Oh - and there was the release of the motel cats further downtown...continuing my "holding pattern on 7th St and another trip to the gas station - gas is getting expensive! 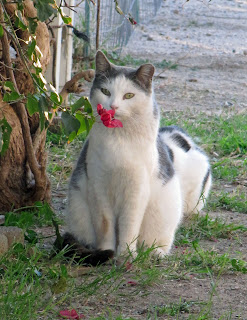 Wednesday would begin another adventure with the mobile...I did have finally one last cat to drop-trap and get to the vet on Wed. I'd be setting off for El Mirage mid-afternoon for a several day trapping job. We had arranged for the mobile to do a tame cat and dog spay day at a MHP in El Mirage. Originally we planned on doing feralstoo but the response was so overwhelming we decided to do the tame animals on Thursday and bring all the ferals trapped over two nights in to Phoenix for the mobile on Friday. Barbara and Suzie came later and trapped one side of the park and I trapped the other side. We hit about 10 locations in the park total and and ended up with 44 feral cats on Friday along with two more cats we drop-trapped in the middle of the day! The mobile ended up doing 44 tame cats and dogs onThursday in El Mirage. The park manager and residents were so happy we had helped spay and neuter a total of 86 animals. The ferals had to be done on Friday in Phoenix as there were too many animals to do on the mobile in one day. Thank you Grant for letting us use your parking lot to park the mobile on Friday.


The cats were released on Saturday morning in El Mirage. I'd be back in time to help trap and aftercare and another 25 cats for a clinic on Sunday, January 30th.


The Spay Neuter Hotline needs your help! We need to raise money to help caregivers and cats in need. Tax-deductible donations can be mailed to:

100% of donations go to spay and neuter feral cats. Thank you for your support.
Posted by Pam at 8:34 AM