December is ticking away and I am still trying to meet or exceed my 2,200 cat goal for 2012. As of last week the number cats TNR'd by me in 2012 was 2,087 in 2012 (9,910 cats from 2008 on). This coming week I'll be trapping every night to try to reach my goal. With the holidays coming, it becomes more difficult to keep up the pace. And, Suzie has been out of commission as her truck has been in the shop for nearly a month being fixed. So I am pretty much on my own. Audio books really help since it seems I am driving ALL the time trapping and going too and from the vet.

There have been so many rewarding trapping experiences this past year. It is difficult to chose the most memorable. However, one from November stands out as exceptional. It was a colony of 58 cats in the 85051 target zip code. This is one of the zip codes the Arizona Humane Society (AHS) is funding to help reduce the number of cat turn-ins at their shelter. There were 27 males and 26 females in this colony. This means 26 female cats will not be having kittens next year. All the cats were trapped over a two night period.

The setting for this colony was idyllic. It was a several acre historic property nestled within the city and surrounded by housing developments. The historic house and garage were adobe and the grounds were perfectly suited for a colony of feral cats. I'd driven by this place many times thinking "there must be feral cats there". I had hesitated driving is as there was a long tree-lined driveway leading up to the house and I had no idea what might be waiting for me at the end of the driveway!

Since 58 cats was too big for my Element, I had the help of two ace trappers, Sheri and Andrea. Actually it was Sheri who had discovered this colony thanks to Toni at Citizen's for North Phoenix Strays (CNPS). Toni often gets calls from caregivers looking for help finding homes for cats and kittens. Since many are feral cats that are not adoptable, she refers caregivers to me if they are in need of TNR and these folks desperately needed out help. So many do not know about TNR and become frustrated wondering just what to do. Of course when I hear there may be 60 cats to be fixed, I immediately become anxious to get there and fix 'em. These caregivers' prayers were answered when we showed up to help them. This photo, taken as the first two traps were set, says it all: 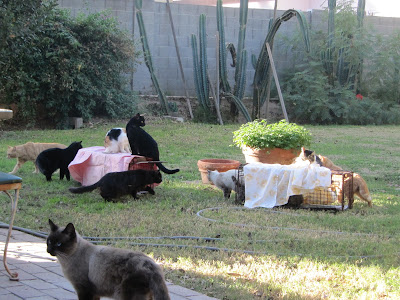 We trapped for a Sunday clinic at the North Phoenix Spay Neuter Clinic. This was carefully planned as we were not sure how many the kind Dr. would do. We trapped 50 cats the first night and five more showed up from other caregivers. And, thanks to the Dr. and his wonderful hard working staff, they managed to fix all 55 cats that day in additional to their regular appointments! So I had 50 cats in the garage for aftercare that night and Sheri and I also went back with the trusty drop-trap to finish the job. Not only did we have to cats to trap and get to the clinic the next day but we'd have 50 cats to aftercare and to release the next morning. We had eight more cats in the next day including the ones trapped over night. Sheri was at my place before six AM to pick up cats to release. The photo below shows traps being lined up as we trapped the first night: 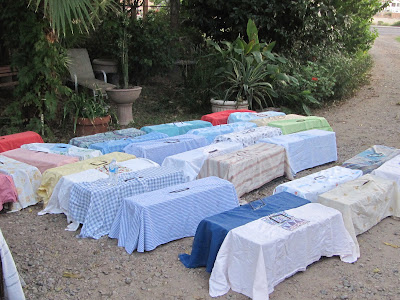 The photo below is of Sheri releasing one of the first 50 cats the next morning. As you can see it was still dark out. 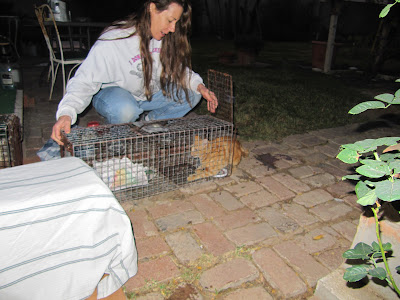 The next photo shows some eight, happy, fixed kittens that were released the following day. Notice that great looking ear-tip. 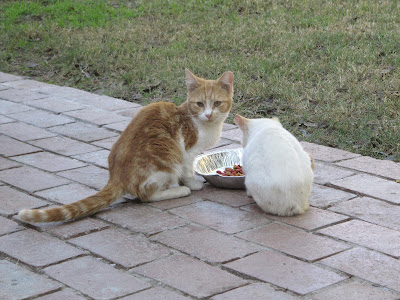 After picking up the last eight cats that night I had another trapping job for 12 cats that turned in to 26 cats over the next two nights. That next Saturday I trapped 21 more cats making the total for the week of 105 cats. What made this more remarkable was that all of these cats were trapped the week of Thanksgiving...As most of my fellow trappers know, the holidays do not stop my trapping. Cats know nothing about holidays and continue to breed. Although November is not kitten season, it arrives in March of the next year. Thankfully, these 105 cats in the metro Phoenix area will no longer be part of the breeding cycle.

Thanks go out to ADLA and the AHS for making it possible to continue and expand TNR in our community. TNR has proven to be the most humane and effective method of stabilizing free-roaming cat populations. When I became involved with TNR in 2003, I had no idea 10 years later there would be such awareness and and interest in TNR. It truly has made a difference in my life and in the lives of free-roaming, primarily feral, cats in the metro Phoenix area. Please spread the word - help is available. Call the Hotline for information and assistance with TNR: 602-265-7729 (SPAY)

Happy holidays and happy trapping!
Posted by Pam at 8:53 AM