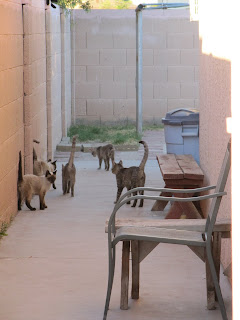 I released the cat from Friday in the AM. The caregiver had trapped one more cat that would have to be held for the Tempe clinic on Sunday. After the release I delivered 15 traps to a central Phoenix neighborhood group that was trapping for the Tempe clinic the next day. Three caregivers also picked up traps form my depot later that morning.

The dynamic duo would be out trapping Saturday night for Sunday. As often happens we needed a few more cats. I'd have 13 to go to the vet on Sunday. It was a two-vet clinic and we did over 100 cats that day. I worked at the clinic and aftercared the cats Sunday night while the caregiver set traps for the stragglers.

I had two releases to do in the AM. The second night trapping yielded two more cats for a total of 14 cats from this location. I took those two cats to the vet and aftercared them Monday night. I took a night off from trapping that night. The cats would be released in the AM.

The three master trappers had a 10+ job in one of our target areas in PeoriaTuesday night. As we drove up to the "owned" trailer with what looked like an abandoned house in front, we knew there would be LOTs of cats. The caregivers had moved into the trailer when the house was condemned and the cats lived under the abandoned house. We caught a total of 14 cats that night and overnight. I'd have to pick up a pregnant cat for an emergency spay in central Phoenix as well. Those that know me know I'll go anywhere anytime to prevent kittens from being born.
Thursday - 2/4


The release of the 14 cats would occur later in the AM. I had to pick up seven tame cats for a lady with no vehicle. She got them in carriers but the vet was only able to fix three of them (all pregnant females) as four were too wild and needed to be in traps. I'd take those four in on Friday after transferring (carefully) into traps. These were all inside cats. Can you imagine four males competing for three females inside a small apartment? Unbelievable...I took the three females back later that afternoon.

Very early in the AM I picked up two free-roaming tame cats living with a homeless man. I'd taken traps to him earlier in the week and he was supposed to have them in the traps when I arrived. Instead they were sleeping with him in the makeshift tent. He did get them in the traps OK and I headed to the vet with those two cats plus the four wild males from the day before.

Just when one thinks they've seen and done about everything to get a cat or cats fixed, one encounters another, even more challenging situation.

Helping the less fortunate requires donations. Many of these caregivers cannot afford to spay and neuter their cats and end up with too many cats. Most of these are free-roaming cats that become part of a "feral" colony. As the colony gets bigger, the caregivers become overwhelmed and some eventually call the Spay Neuter Hotline for help. These big colonies cost a lot to spay and neuter we are always looking for funding to help caregivers in need.

Please consider a tax-deductible donation to ADLA to help fix feral cats. You can donate on-line at our website:http://www.spayneuterhotline.org/

Or mail a donation to:

Thank you for your support!
Posted by Pam at 8:05 AM