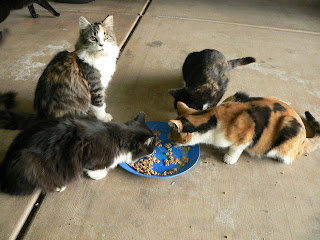 I had a trapping for for the 2/14 Tempe clinic in E. Phoenix. It was very labor intensive and turned out to be a three night trapping as the cats could not be done on Sunday. If I recall Wayne trapped a few more than planned! I ended up with 14 cats that night and they all had to go to the vet on Monday, 2/15. The good thing was - I caught them all! It was a long day as I volunteered at the clinic as well. Trapping ALL the cats in a colony is always a thrill - not only because every job is a great challenge but especially knowing that there would be no kittens in the Spring

After holding the cats overnight I took them to the vet in the AM, picked them up in the afternoon and after-cared them that evening. The usual routine...

The caregiver set traps Monday night and caught a 15th cat overnight. So after releasing the 14 cats I'd be back at the vet on Tuesday with one more cat - the last cat. No wonder I drove over 20,000 miles last year hauling cats around the valley from as far West as Aguila and Wickenburg.

SJ and I had a trapping job that night. It was a big one but became even bigger when we found out a friend was trapping for someone near our trapping location. She needed our help.

Oh, and I also had to pick up one more cat from a caregiver who had been trapping and calling me for pickup in the AM. One more stop in the AM...

We ended up picking up the stragglers in the AM for a total of 14 cats (to one vet) and nine cats at our location that went to another vet for a total of 23 cats that day. Our caregiver had offered a nice donation for us to help her and this makes a real difference as we need donations to help other caregivers in need (like the other elderly caregiver). If I recall I did have all 23 cats to pickup, aftercare and release the next day at the two locations . SJ did set traps at our location that night as well as the other location and caught six more for a total of 20 cats TNR'd at the one location and a total of 12 at the other location (3 more caught the second night).

...and, if this was not enough, I had planned two trapping jobs in E. Phoenix for Wed. night. One was new and the other I'd trapped before - 20+ cats. The caregiver at latter claimed there were 15 more. So I set 15 traps and headed off to the other smaller job. It was a bust as the neighbor down the street was feeding. I only caught 5 cats at the other job and never saw any cats there - not even any of the 20+ cats I'd trapped there the last summer. It is hard to explain this as she claimed they were still around. Go figure.

SJ took the stragglers from the W. side job to one vet and I took the five from the E. side to another vet after checking traps in the AM - more driving...I'd be picking up at two vets and aftercaring before heading to E. Phoenix again to set traps a second night at the two locations from the night before.

I was able to trap two cats overnight at the location that was a bust the night before and I caught one more at the other location for a total of three at the vet on Friday, 2/19. These would be released at the two locations early Saturday morning

Please consider becoming an ADLA member or making a donation to help our spay and neuter programs. Many may not know this but we are now operate statewide. To become a member visit our website at:http://www.spayneuterhotline.org/

We need your help to improve the lives of homeless cats...Thank you.