No trapping for Sunday's clinic in Tempe but we did once again have too many cats. Fourteen cats had to be overnighted and taken to two clinics on Monday. I had not expected to trap that Sunday evening but a caregiver nearby who had checked out traps from me needed some handholding. Figuring this would mean just setting the traps, I agreed to come by and help. Well, little did I know this would turn in to a five day commitment! The caregiver indicated there were only three cats - but I discovered three more younger kittens had just appeared when I got there. Mom had already had two litters and this had to stop...

I was tired from working at the clinic all day but I caught two cats immediately that night and two more overnight. I took a total of four to the vet on 10/12 and transported home some for Suzie. I went back for the remaining two cats that night - one was the mother of the two litters. Still no luck. I set the traps and found one cat in a trap the next morning. Still no mother cat. I set traps hoping to get her overnight while the other five were recovering. I had a big job in Goodyear that night and had to be there around 6:00 PM so time was running out.

The Goodyear job was a bust. There were supposed to be 15 cats at two locations on an open city property - commercial properties being the hardest place to trap in my opinion. Grant Erhling came with me as he had wanted to go out with me on a BIG trapping job. Well, it turned out to be not too productive. We only caught three cats! There were cats there but they were not cooperating. Traps could not be left out overnight and there was no way I was driving out there in the AM. It was disappointing. I did take two traps to a lady I'd helped before in Avondale to trap two cats for the next day. So on 10/13 I took in three cats from this job and one more kitten from the other job - but still no Mom cat.

The next morning I decided to go for the next line of defense - the trusty drop-trap. I planned to release the five cats hoping Mom would come by looking for her kittens. It was time to get this little super-breeder once and for all! I could not let her have yet another litter. She was a tortie of course...a perpetual breeding machine. I waited inside the house with the string for about 1/2 hour. This time, I put an entire can of sardines under the dropper. She was very hungry by now. Finally she could resist no longer. I got her! We were very cautious in transferring her to the trap as I did not want her to escape. It was off to the vet but not before releasing the three Goodyear cats and picking up two more cats in Avondale. They were kittens when we trapped there months ago and the caregiver had them captured. Before the trip it would be back to the gas station again - Goodyear is a long way from north Phoenix. I dropped all three off at the vet and picked them up later in the day for aftercare. Then it was on to two more trapping jobs in Central Phoenix.

One was a four cats job around 36th St. and Indian School. The other was around Camelback and Central for two cats - a mother an kitten. I was helping a couple of elderly caregivers who could not do trap and transport. I caught the mother cat immediately and left the trap for the kitten before setting off for the other four cats. I had them trapped within an hour - a tortie and three orange older kittens. I went back to the other location and no kitten. So I rebaited the trap for overnight.

The caregiver called early - no kitten. However, she was out there crying for food. The kitten only had three legs and "hopped" so I think it was impossible for her to hop into the trap without shutting the door. The drop-trap to the rescue once again! I sat inside the sliding glass door waiting (at 6:30 AM). I caught her under the dropper in about 1/2 hour. I released the mother from the day before, then released the four back at the other location and then off to the vet with with the one kitten. Turned out that the mother of the three orange kittens was already eartipped! Go figure. This happens occasionally. In this case the caregivers had seen another similar looking cat about one month ago. I guess this was the "surrogate" mother. The Sunday night trapping had indeed turned in to a five day adventure! 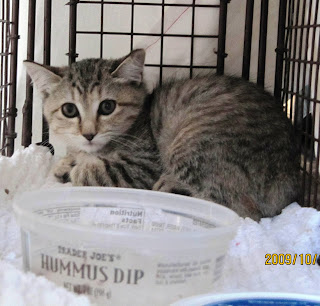 The photo above is of the three-legged kitten in the trap before I released her on Saturday morning, 10/16. She was happy to be back with mom and fed by a nice lady who truly cared. She cared so much about them she called the SNH and had them sterilized before two cats turned in to 20 cats.

A word on Torties and Calicos. As you know they are almost all female. From my experience, there a a lot more Torties and Calicos in the feral cat population. I cannot prove this scientifically but it makes sense. They are the most wary of humans, most difficult to trap, and seem to reproduce more often. In large colonies one sees an extraordinary number of them - hence my term "breeding machines". Along with them will be a lot of orange tabby male cats which I thing they are genetically connected to - although cat genetics elude me. I've had many a sleepless night thinking about the last cat I did not catch and it is usually a Tortie or Calico that had skunked me.

Next week - National Feral Cat Day
Posted by Pam at 7:39 AM