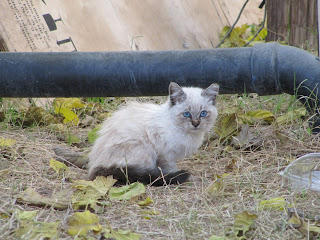 There were last minute cancellations for the Tempe clinic so on Saturday morning we called a couple of caregivers at the last minute and told them to pull the food. Beth and John were also trapping at a railroad park and I'd be transporting cats to the clinic for them. I'd also had a last minute call from an apartment manager with a stray, abandoned female cat needing fixing. I arranged to pick this cat up on my way to trap.

Barbara, Suzie and I planned to meet up at a trailer park in the West valley to trap approximately eight cats. I'd be stopping to pick up the cat at the apartment complex that was pretty tame and the caregiver had her confined. Suzie took five traps to a lady who could not figure out how to use the traps - yes, you heard it right. Between these three jobs we'd be able to make up for the cancellations.

I got to the trailer park early and started trapping. When Barbara arrived she indicated there were also cats at the dumpsters near the railroad tracks - a mom and four kittens (see photo of Siamese kitten with eartip - kitten trapped at the dumpster). We later found out there was a lady feeding them that had 10 cats at her trailer needing to be fixed but those would have to wait. Subsequently we found two other colonies needing to be trapped as well. This park needed help! There were also free-roaming dogs everywhere, many in terrible condition - some appearing homeless. This park had been there a long time and surely would become one of my long-term projects.
When Suzie arrived we already had more than eight cats trapped. Barbara and I set off for the dumpster and caught all five cats within 15 minutes - they were hungry. This trailer park was right on Grand Avenue and the train tracks were less than 50 feet from the dumpsters. We set a few more traps at the trailer, went to dinner, and found all the traps filled upon return making a total of 17 cats trapped (so much for 8 cats!). All told we'd have 24 cats for the next day including the five Suzie trapped on her way over and overnight at the other place and the apartment cat. Now instead of too few we had too many cats. Sound familiar?

The Tempe clinic was a great success due to wonderful trapping weather. Only one of our crowd got fixed (the apartment cat) and we'd have 28 cats to go to the vet the next day including the railroad park cats Beth and John had trapped. They had been back trapping on Sunday morning and caught a total of six cats.

I took 17 cats to one vet on Monday and Suzie took 11 to another after feeding the cats at my place the night before. I'd have a few (28 cats) to aftercare that night before setting off for East Phoenix to trap 10-15 cats for a caregiver needing help. That night I only trapped 10 cats in a rather high-end residential neighborhood (Arcadia). What a contrast to the trailer park and the dumpsters on Saturday night.

I released the trailer park cats the next morning. while releasing the mother cat and 4 kittens at the dumpsters the train came by. The noise was deafening and I had to wait to release the cats. they all ran under a nearby trailer where I captured this photo of one kitten.

I took the 10 cats to and from the vet the next day. This caregiver would be trapping on her own that night trying to catch one last cat. One of the cats had an eartip I'd missed. It turned out the neighbor across the street had trapped a couple weeks before and I'd missed the address connection. Working on a really good database of trapped colonies is on our "to do" list. Barbara and Suzie trapped at two locations that night caught a total of 14 cats; 12 at one location and two at another. I'd be picking them up at two vets for aftercare and release the next day but unfortunately I'd be missing a nice dinner with them that night.

I released the 10 cats and picked up the one cat caught overnight and took it to the vet. Suzie has busy all day so I came home and loaded up all her cats to release at her two trapping locations. Just before I arrived at the second location I noticed the car listing to one side and feeling sort of mushy. As I pulled up to the curve I confirmed the worst - another flat tire! These were the brand new tires I'd just purchased. Fortunately I was able to release the cats as I waited for Honda Roadside to arrive to change the tire. I loaded up the dirty traps, unloaded them at home, and headed back to the tire store once again. This time there was a nail in the tire, probably picked up at the dumpster several nights earlier. The bad news was it was not repairable. Fortunately I had the extended warranty and they replaced it for free. I had to wait again but it was worth the wait.


That night I was set to trap three cats for a lady in another mobile home park (55+). I'd trapped for years in here and have written about some of these episodes in previous blogs. We were after three kittens. Well, I caught two of them, one right away and one the next night. I took them to the vet early and when I went to pick them up they were not fixed yet. The vet had been called away on an emergency. I decided to take them home and wait until Sunday's clinic in N. Phoenix to have them fixed. Fortunately I was able to catch the last kitten that night so I'd have all three for Sunday. Oh - and I had to release the one cat trapped overnight on Thursday as well as pick up my traps.
Next week - Back to the same trailer park for more cats.

Please consider a tax-deductible donation to ADLA to help caregivers in need like those at the trailer park we helped this week. To donate please visit our website at: