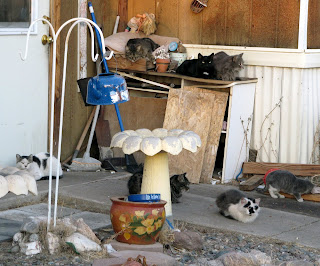 Sunday was our one Sunday a month clinic in N. Phoenix. I had planned a 15-20 cat job not for from me as it is always busy in the AM getting ready for the clinic. Suzie, Beth and John also were trapping that night. I trapped 19 cats that night and four overnight for a total of 23 cats. The day was hectic as always but the adrenalin kicks in as if running a 10K and one just marvels at the number of cats being trapped and sterilized. We ended up doing over 60 cats that day. There would have been more except one trapping job came in with a bunch of already fixed cats. Turned out the adjacent business had trapped cats and had them fixed on 11/9, just one week before! We do try to correlate locations in our database but this one unfortunately slipped through. Tempe also had a successful day so over 130 cats were fixed that day. The caregiver managed to trap one more cat overnight for a total of 24 cats from that location.

I only had the one cat to take to the vet today. It was a slow day due to the weekend clinic. I did not trap on 11/16 as I'd be trapping with Suzie. Barbara could not trap this week and so Suzie and I had planned a couple Tuesday night jobs in Glendale.

We set out for Glendale about 5:00 PM for one trapping job for about 12 cats. The car was full of traps as we also planned another job in the same zip code for four to five cats - a trailer park. At this particular park we had already trapped a LOT of cats and at the end of this adventure there will have been 90 cats trapped in this trailer park since 2005! The park manager is good at contacting us when new cats appear, usually from new residents who have not spayed and neutered their cats - many leaving them behind when they move. Unsterilized tame cats are often the source of feral cats in these parks, especially in low-income areas. These are the caregivers and cats needing financial assistance. Please consider a tax-deductible donation to the ADLA Spay Neuter Hotline TNR program this holiday season. Click here to donate. 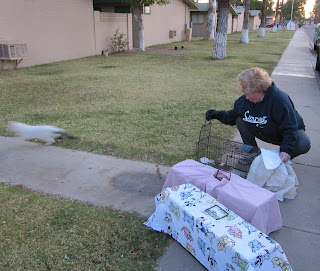 We trapped 14 cats at the first location and six at the other location. Six cats went to one vet and 14 to the other vet. One cat would need an eye removal and would have to wait until the next day for surgery. There would be drop-off and pick-up of all 20 cats and then we'd be back at both locations for a second night's trapping (with the drop-trap in our arsenal of course).

We trapped six more at the one location and another six at the other for a total of 12 cats. We could not leave traps out overnight at the first location so we drop-trapped one kitten living in a vacant apartment gaining access through an empty air conditioning vent. We were sitting on the ground waiting and plotting our strategy for next week when I looked up and to my surprise, the kitten was eating under the dropper! I said to Suzie, "pull now. She was not even looking at the drop-trap! This kitten is still in foster with one of the vet techs at the clinic and hopefully will get a home. The one cat needing the eye removal ended up staying at the vet until the following Tuesday thanks to one very kind veterinarian. Neither of the caregivers had vehicles or places for aftercare so we needed to do all the work...

This drop-trappng story reminds me of my most memorable and classy drop-trapping experience several years ago while having lunch at a rather posh restaurant in Casa Grande. The cats were outside on a stunningly beautiful patio while we were eating a delicious lunch inside. As the cats we were after appeared, Suzie left the table and sat inside the back door with the string. Problem was she could not see the drop-trap from behind the door. I watched and told her when to pull the string. We then went back to eating lunch while waiting for the next "victim" to appear, repeating this process several times until all the cats were caught.

Upon releasing cats at the two locations and picking up six at one of these locations we set out again to two vets as it was Thursday and the relief vet was at the one clinic.

We released all 12 cats back at the two locations in the morning. All that was left was a LOT of trap washing to get ready for the next week and, of course, caregivers needing to pick up traps as well. We both spend a lot of time checking out traps and showing caregivers how to trap. After six years one would think I'd be tired it it but I'm not. I love it when caregivers call me and say, "I caught ALL the cats and I am so excited!"

Most of our caregivers do their own trapping and transport. Trappers like me, Wayne and Suzie go out on larger jobs and help those needing assistance. These include caregivers who have no vehicle or are elderly or disabled. That list is growing. If you are interested in trapping please let us know. We need people who can problem solve, deal with difficult situations, have patience and, of course, lift. It is very rewarding work and a good way to get exercise!

There was good news in that the caregiver I'd trapped ten cats for last week called me the night before and had finally caught the last cat, the mother. She took it to the vet on Friday. Her seriously wounded cat was fully recovered and getting used to being a house cat. I'd be picking up my rabbit cage and trap. Another job was now finished and there would be no more kittens in 2010. What a good way to end the week...

Next week - More successful drop-trapping and Thanksgiving. All the vets are closed - darn it!