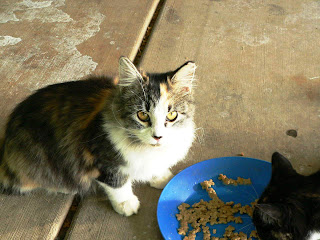 
The monthly 50+ cat clinic in N. Phoenix was on 9/13. We also had the clinic in Tempe that day and were hoping for about 120 cats total. I'd scheduled a trapping job for ten cats near my home as I have clinic logistics to deal with and trapping for these clinics is always hectic. And if this wasn't enough, it was at an apartment complex! Businesses, and apartment complexes especially, are always difficult places to trap. For one thing one never knows when they are finished. Then there is the constant flow of people including pizza delivery people and the like. There are "owned" cats roaming around and there is usually no way to leave traps overnight. I was facing all of these obstacles. And, I had trapped here before so there were some eartipped cats on the loose.


Well, I stayed there for three hours baking in my car watching traps in front of the apartment where the cats were fed. Traps could not be left unattended so I watched them until almost 9:00 PM. I trapped five but one was eartipped. The neighbor caught an additional cat on his patio overnight for a total of five cats. Not bad for an apartment complex.


Check-in begins at 7:00 AM on Sundays and caregivers start arriving at 6:30 AM - so I have to be there early. As always, I lay awake all night worrying about too many cats or not enough cats at the clinics. Since I could not sleep I got up and went back to the complex at 4:30 AM and set traps and waited. No luck. This clinic turned out perfect with 54 cats. After cleaning up the clinic and taking cats home for aftercare, I was back at the complex at about 6:00 PM and waited again in the heat until 8:30 PM.

So I went back the next morning and sat for two hours again before releasing my catch. I caught one cat! The sad part is that this one cat ended up being previously fixed (but not eartipped). Can you believe all that work for one prevously fixed cat? But sometimes perservance does pay off. I released the cats from the previous night's trapping. After picking up the one cat I was off on another adventure to trap 11 cats in zip code 85006. I sometimes feel like I am in a holding pattern between the 85006, 85008 and 85009 zip codes! This job was truly what I call a "drive by" trapping. Within 15 minutes I had nine cats and as it turned out, two of 11 were already fixed. Luckily it was cool enough to keep them in the car overnight so I had one less lifting step in the process. Summers are sometimes brutal for trapping, especially large colonies, because cats need to be unloaded and kept cool overnight in the garage overnight before surgery.


Took the nine cats to the vet and picked them up for aftercare in the afternoon. Suzie was trapping two jobs with Barbara that night. Sometimes I go with them on Tuesday nights but I decided to stay home that night and "relax". 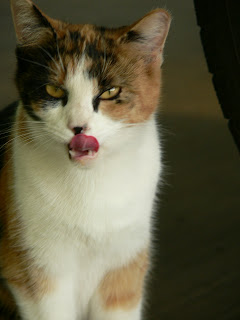 
I released the nine cats back in the early AM and got a call that morning while on the road from a caregiver I had delivered traps to earlier in the week. They had caught two cats on the second night's trapping and his wife had taken ill. Since I was down in that area I picked up the cats and took them to the vet close to me as I'd be picking up Suzie's six cats anyway for aftercare. I'd have eight cats for aftercare that night. After getting all of those cats settled in the garage I was off on a three cat job (first trip). The caregiver had no car and was very emotional about the TNR process. I had to do some "counseling" as I often have to do - she was even crying when I arrived. I caught one cat immediately and left the caregiver with two traps to try to catch the other two cats trapped in the small bedroom of the apartment. There was a mother cat in the closet with four, eight day old kittens. Those would wait for later. And I said I'd never trap at an apartment complex again...Oh well.


The caregiver caught one more overnight so I was off to pick it up (second trip) after releasing the two cats back I'd transported to and from the vet yesterday. Suzie picked up her cats early for release and brought me my coffee from Bucky's. Thank you Suzie! She'd be picking up two stragglers from the previous days trapping


Took these two to two vets along with seven cats Roni had trapped and delivered to my house early that morning. I now made trips to two vets to drop off 11 cats. Had to pick up 13 cats at two vets in the afternoon as Suzie had taken in the two last cats from a job she had done the previous night. I aftercared 13 cats in the garage from three caregivers. Roni was supposed to pick up her seven that night but due to a mixup I ended up with them at my place.


The nervous caregiver trapped the last cat in the bedroom overnight. I'd now be releasing the seven of Ron's on the westside, back to central Phoenix to release the two cats (third trip) and pick up the last cat trapped in the bedroom to take it to the vet. Suzie wuld be picking up this cat along with a pregnant one she drop-trapped that morning for another caregiver. Suzie would be picking both of these up as I had to get downtown to the Tom's Tavern Fun Raiser that began at 6:00 PM. She dropped both cats off at my house before coming to the event.


The Fun Raiser was a lot of fun - really! If you did not make it you missed the Maker's Mark bourbon tasting and some nice raffle items. Sheriff's Joe's MASH Unit people were there and I spoke on TNR and the SNH. The Manhattans were great and we had a full house. Karen will be updating everyone on the event - stay tuned to the ADLA website and Facebook.


Next week - a brief break from trapping to do some other volunteer work...for Uncle Sam.