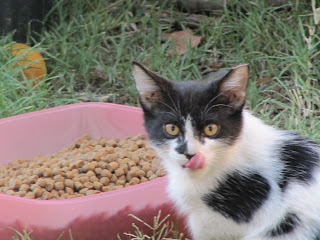 Photo above is of kittens feeding after their release on 10/8. "Yum, this food is sure tasty. Check out my eartip"!


There were fewer cats than expected on 9/27 at the Tempe clinic. Darn it - I could have trapped for the clinic! Frustrating to miss some vet slots when there are cats to S/N. I think there were about 63 cats.


I had been contacted by someone I'd helped drop-trap a cat in the past. Guess what? She had more cats to TNR. Having had health problems she needed "full serviece" this time and I was happy to help her. She said there were six or seven cats. I ended up trapping eight cats, several overnight. We caught them all (I hope)! I wish she had caught them all the first time around. It is difficult to do as often some do not come around until the next night and caregivers do not perservere. Sometimes this is because they can't stop feeding the cats. Leaving traps out overnight works well but can only be done in secure area like someone's backyard.
I've found a second night's trapping is essential to success at getting ALL the cats and making sure there will be no more kittens. For those in doubt, this does work. I often talk to caregivers I'd helped years ago and there have been no kittens for several years. And, most of those with large colonies of 30 or more say, "we are down to less than ten cats now". This proves that the life of a feral cat is often short. We rarely see "old" feral cats in our clinics. Most are young and amazingly quite healthly despite living outside.

I ended up at two vets on Tuesday due to a caregiver not getting to the vet on time. Thankfully one vet took her cats at 11:30 AM. Again, our vets understand the complexity of TNR and are usually willing to accomodate. It seems easy enough - set traps, trap cats and fix them. Wrong! The logistics of trapping and being sure ALL the cats get fixed rivals solving a a very complex physics problem with multiple variables. With people involved it becomes most challenging. I picked these cats up at both vets (at different times of the day course) for aftercare. It was a frustrating, although productive, day.

Later in the day I got a call from a caregiver I'd helped in early August. A cat that had been deemed a previously fixed female had kittens! What a mess. Occasionally this happens. It was made worse as I was the one who had helped her and she had claimed the cat had given birth before. The cat rejected the kittens and she was bottle feeding them. She wanted the mother fixed right away.

So I picked up the mother cat in the morning to go to the vet and later transported home cats Suzie and Barbara had trapped the night before at two different trapping jobs. I was back to two vets again due to overflow at one vet. And, if this was not enough, there were still five cats with no place to go. These five would have to be held in my garage until the next day. Things now were getting tight. I had to pick up 13 at two vets and had a trapping job planned for 6:00 PM.

When I arrived at the second vet they were still doing surgery due to our bringing too many cats. I had to wait 45 minutes at the cinic and still had to unload all these cats at home. There would be these 13 cats plus the five waiting to be fixed for a total of 18 cats in my garage. I arrived at the trapping site at almost 7:00 PM planning to trap six or seven cats. My friend Joyce was helping me as we planned on leaving traps overnight and a second night's trapping. Since Joyce lived near the trapping location this would save my driving back several times and we use a vet nearby - freeing up vet slots at the other vets for more cats.
10/1

Well, six or seven cats turned in to 13 cats (actually 16 as two more were trapped overnight and two the next night and one was a previously fixed cat). So there had been 18 cats in the garage and ten in the car overnight for a total of 28 cats at my place overnight.

Again, too many cats and not enough vet slots as our one vet normally open on Thursday was closed. So, it was back to the Healing Hearts mobile with 11 cats. Thank you Jan Wilson for helping us out again in a pinch. Three were from my trapping job, five were the left overs from yesterday, and three were from Suzie's second night's trapping at the other job she had trapped. I keep saying trapping is not as easy as it might seem! Oh and Joyce took two cats to the vet near her. These had been trapped overnight, so we were at three different vets today.

I took ten cats to one clinic and 11 cats to the mobile and Suzie picked up the cats at the mobile mid-day. I picked up the ten cats for a total of 23 cats at my place that night - all having to be fed later in the evening. Joyce set traps out overnight and caught two more cats.


That night I had a trapping job for only one cat. The caregiver had offered a large donation if I would help her trap and fix this cat. Her husband was not in favor of TNR nor of having her even feed the cat. So we set up a "cover" trapping operation. It felt again like a "drive by trapping" as I had the cat in less than five minutes. The term "drive by trapping" originated from a drop-trap situation a couple of years ago. I literally sat in my car and pulled the string through a cracked open car door on a cat under the drop-trap. This took place in less than a minute - hence the term "drive by trapping".

I took in the one cat in the AM and then met Joyce for the release of the 15 cats. We found two more cats in traps from the second night's trapping. I think we had trapped them ALL. We both dropped them off at the nearby vet. she would pick them up and release them. When I retrieved the one cat at the vet it turned out to be a previously fixed female! She was obviously an abandoned pet. I returned her the next morning to the happy caregiver. She gave me the promised donation despite my trapping an already fixed cat. She wanted to help other cats in need and there arep plenty of them out there.

Having trapped nearly 30 cats this week meant lots of traps and covers to wash and get ready for next week. Thank you Bill.

More and more caregivers are in need of financial assistance due to economic hardship. The Spay Neuter Hotline TNR Program depends on donations to pay our vets. Please consider making a tax-deductible donation to help those in need. For information on how to donate click here.
If you know someone feeding feral cats please call the Spay Neuter Hotline at 602-265-7729 (SPAY) for assistance.

We are also having a huge yard sale on November 6th and 7th. We need items for sale. So clean out your closets! To donate items for the sale please contact Suzie at 602-689-6069.