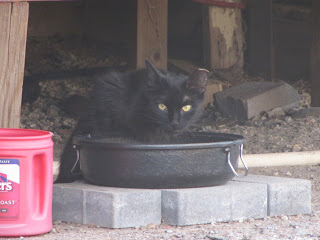 I cannot believe it is already August! Yes, I am a bit behind on my blogs but it has been a very busy year so far. So far this year I've trapped and fixed 1261 free-roaming cats. Kitten season was one of the worst ever in my opinion. There were times when I was wading in kittens and could do nothing...though I always try to follow up and TNR kittens later, if they survive. It's a challenging part of what we do. Fixing entire colonies is important and often requires a lot of time and effort (and expense).

Suzie fostered one litter of newborn kittens with a feral mom for several weeks. These kittens were dug out of the mud under a stack of plywood in a back yard full of junk. The kittens went up for adoption with a local rescue group. These were the lucky ones. Numerous other kittens from this same trapping job were TNR'd I think there were nearly 40 cats fixed at this location. A situation all too common but one we are trying to prevent. Hopefully some of them survived - they were only about six weeks old. One never knows but hopes. This was a very poor caregiver who needed out help desperately - he was lucky. Many caregivers are not so lucky and feel helpless...There are so many sad stories out there - I hear then, day after day.

This black mother cat was fixed along with her five kittens. These cats and kittens has a caring feeder who I'd helped previously. He was very grateful and donated generously. Still, there are many more are out there needing our assistance, help with trapping and transport but mostly needing financial assistance - and especially in the E. Valley.

The worst thing that can ever happen to a cat born on the street is to not be fixed. And despite years of effort it is beginning to seem hopeless. Yet a part of me still believe we can stabilize free-roaming cat populations. This year, The Arizona Humane Society (AHS) had record numbers of cats and kittens being turned it and more than ever before being euthanized for lack of space - meaning too many cats and not enough homes for them. We thought things were getting better but I am beginning to wonder. Sometimes we need to hit bottom before acting. So what can an individual do to stop this endless cycle? Here are some ideas.


Spread the word about spay and neuter. Unsterilized pet cats that are the #1 cause of cat homelessness. If you have or know of someone with a mother cat and kittens, tame or feral, help them get the cats fixed. Call the Spay Neuter Hotline for assistance: 602-265-7729 (SPAY). Encourage caregivers NOT to turn them in to an open-intake shelter like the AHS or MCACC. chances of getting out alive are slim. The most common call me receive is for a single cat having kittens in someones yard. Breaking the breeding cycle early avoids having to TNR a colony of 40 cats later. It is a lot less expensive and a LOT less work. I know this because I do the back breaking work every night. And most importantly, donate money to help with the cost of TNR for those who need help. Donations can be sent to:


100% of donations targeted for TNR are used to pay for spay and neuter of free-roaming cats. Your donation is tax-deductible. And spread the word. TNR is the most humane and effective method of stabilizing free-roaming cat populations.

Thank you for your continued support!
Posted by Pam at 8:34 AM