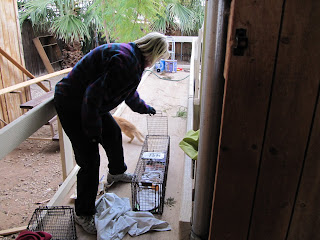 On Sunday we had the regular Tempe clinic. There was no overflow once again thanks to Suzie's extraordinary scheduling. There were two vets that day and there were exactly 110 cats, just what we had planned. No one can imagine how difficult it is to predict the exact number of cats that will be trapped. There are so many variables that make up the equation. Suzie is the expert, hand's down. No one could do what she does week after week as she has done for more than seven years.
12/7
I had what started out as 11-12 cat job on Monday night but it turned out there were only three or four ferals. Eight others were tame cats living in the house. These I'd do later through the MCACC voucher program. The caregiver was quite elderly, in poor health, had limited financial resources, and no vehicle. She needed help. I did manage to catch two cats that evening and would try for the others the next night when I'd be out trapping two more jobs in the same area with Suzie and Barbara.
12/8
I took the two cats to the vet in the AM. It seemed weird having so few cats in that day. The doctor looked at me and said, "Only two cats?". There was one other cat there for a total of three cats. It was sad as he could have done 15 cats that day and these vets slots were going to waste. It would be kitten season soon and every cat done now is critical, not only to prevent kittens but it is less expensive to do cats that are not pregnant. In this business it's all about money and timing.
I picked the two cats up in the afternoon, deposited them in the garage, and headed over to Suzie's with traps for another night of trapping. We first set traps at my previous night's job and drove off to the two other jobs. Of course my first stop was at the gas station.
The first was a mobile home in Glendale we had trapped twice before. This difficult and demanding caregiver is disabled and feeds at the top of a wheelchair ramp rising up from the carport. This ramp extends into the back yard with railings making it difficult to set traps (and also on the landing which is very small). One has to climb through the bars to set traps in the backyard after stepping over cat dishes and other debris on the small landing. We were going for six to eight cats and set ten traps before leaving for the third location. For sure we'd catch a couple of already fixed cats. We'd be back later in the evening to check traps. 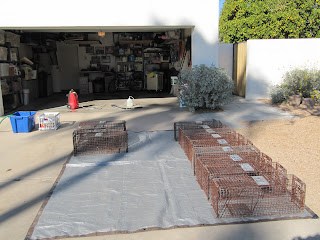 This next trapping location was a new (first time trapping), an eight to nine cat job in the 85037 zip code. I think this zip code has more cats than any other place in the valley. Fortunately, this neighborhood association had money from the city of Phoenix for fixing a limited number of feral cats. The caregiver had suffered two broken legs and had an ambulatory husband confined to the bedroom. Both needed a full-time caregiver who was present. I have to comment that I'd never seen so much useless stuff in one house and garage. Collection of "stuff" seems to go with the territory - i.e. feeding lots of feral cats. I could not resist suggesting to her that she should donate some of these prized possessions to our next yard sale. She said, "You can have everything in the garage". This included several walkers, numerous models of toilets for the challenged, and even a wheelchair!The cats went in and out of a partially enclosed back room. We had to navigate through a narrow passageway through a myriad of odd items stacked as high as the vaulted ceiling. We did manage to trap all the cats (seven that night and one overnight) despite several other impediments including setting traps in the backyard as well. To get in the backyard Barbara and I had to cut down an overgrown bougainvillea blocking the gate using a bent pair of clippers the caregiver managed to find in the garage full of "stuff".
Suzie would be checking traps in the AM. After a relaxing dinner with Barbara we loaded up, set traps overnight, and headed back to the mobile home to check traps. We had five cats in traps. Then we set off to the first location where we had caught the third and last cat. The fourth cat, the mother of course, had not been seen for a while.
12/9
I took the five mobile home park cats to one vet and met Suzie at the second vet with the other eight. She had the stragglers that had been caught overnight. We had a total of 15 cats in that day, ten at one vet and five at the other. There would be no second night trapping at either location.12/10After loading up 15 cats in the early morning I picked up Suzie for the release. We'd be at the three locations again releasing cats. Of course there would be the usual cleaning out and washing traps as we had a big clinic in north Phoenix on Sunday and lots of caregivers would need traps from me for that clinic. I love it when there are no traps in my depot. This means they are ALL catching cats and this is where they should be, not sitting idle. 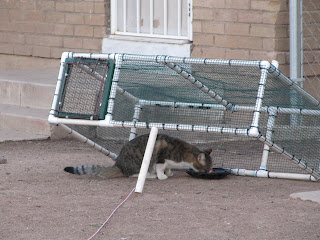 That night I'd be down once again in "the hood" downtown trapping a mother cat and two kittens and trying to drop-trap a male cat a couple houses away. I'd been after him for a long time and now it was time to get serious. Well, I caught him within about 20 minutes despite having to wait for all the eartipped cats coming to eat first. Finally he could not resist! The other three were nowhere to be found and I'd have to make the trek down there in the AM to catch them. Another trip was required but it was well worth it as I had the tomcat in my possession and he had caused problems there for years.
The nice thing about this place is that a concerned resident watches out for new cats in the area and always calls me before things get out of hand. TNR is truly a community effort.
12/11
I was up early and back at the previous night's location by 6:00 AM. The three cats were waiting for breakfast just as predicted. I caught all three within 30 minutes and was off to the vet with the tomcat, his girlfriend, and the two offspring. I say this not knowing of course who the father was, but if it was him, he'd have no additional child support to pay!
12/12
I released these four cats in the AM and was home by 9:00 AM to check out traps to the four caregivers trapping for the clinic on 12/13. We'd be shooting for 60 cats in north Phoenix and 75 cats in Tempe. Grant Erling and I would be trapping Saturday night to help fill the clinic the next day. We'd had a couple of cancellations and would have to find more cats to fill the clinic. These big clinics usually result in last minute challenges and this was typical. Stay tuned...

This week's blog post highlights some of the desperate situations out there. By this I mean there are caregivers in dire need of help. The Spay Neuter Hotline TNR Program depends on donations to help these cats and caregivers. I know you probalby get tired of my pleas but please consider becoming a monthly donor to help those in need. For information please contact Sonia Hernandez at shernandez@adlaz.org
To those of you who are already monthly donors...Thank you for caring.