"It is every man's obligation to put back into the world at least the equivalent of what he takes out of it."— Albert Einstein

Thank you to all of those dedicated individuals out there who work tirelessly to improve the lives of homeless cats...

It felt strange not having a clinic on 1129 as it was Thanksgiving weekend. I would not be trapping that night but would be picking up one cat in the AM along with some tame kittens...

I picked up the last cat for a caregiver I had helped a while back. It had been too young to fix at the time and was now ready. I also picked up four tame kittens that were being fixed through the MCACC voucher program (from a feral mom from a colony I'd trapped previously). I often transport cats and kittens to the vet for those who do not have transportation. This is an important part of what I do as many cats and kittens go unsterilized, not only because people do not know about low-cost and even free S/N, but because caregivers have no way of getting the cats to and from the vet. The four kittens went back to the caregiver that night and the other kitten would go back the next morning. It was very satisfying to know ALL the cats in both colonies were now fixed! Seeing a sea of eartips is one of the most rewarding experiences I know of. 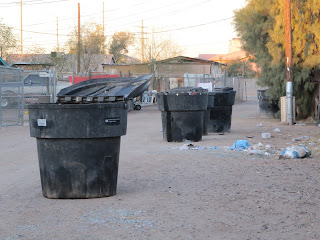 Tuesday night I had a trapping job for nine cats for a caregiver in Buckeye. It is a long way out there but Suzie and Barbara were headed to Tonopah, even further out, to trap 10-15 cats. Grant Erling went with me and we left early to beat the traffic westbound on the I-10 freeway. The cats were being fed by a lady in a senior living center and she had the support of management which made it nice as there would be no confrontation with angry mobs wanting the cats removed.

There were supposed to be about nine cats. However, shortly after we started trapping we found out someone else was feeding them at the other end of the complex. We set traps over there and right away caught three cats! There was also a straggler tomcat not counted in the mix making it a total of 13 cats to be trapped. As we were so far out I did not want to make another trip back there the next morning to retrieve trapped cats. We had to stay to get them all. It was 47 miles each way or nearly 100 miles round trip out there from my place.

We caught the last cat with the trusty old drop-trap. It was a perfect setup. However, the dropper was on a sidewalk that dropped off about six inches. Seconds after I pulled the string the cat hit the side of the trap and moved the dropper a cat's width off the sidewalk. This had happened once before and the cat got out from under the trap. I immediately ran up to it, diving at the ground just in time to move it back on the sidewalk. This resulted in a sore hip but no mind - just another battle scar! Drop-trappers be advised... be careful when trapping on uneven ground and narrow sidewalks - it can ruin your evening!

Suzie and Barbara caught all 13 Tonopah cats as well. We had planned to meet them for dinner but it got too late. This was a situation where the couple had lost their home and a neighbor nearby had agreed to feed the cats after they left. A stranger the caregiver met in Wal-Mart raised the donation by having a yard sale. What a great example of altruism. We see examples of this all the time showing just how much people care about homeless cats.

Barbara and Suzie did end up eating dinner at the truck stop in Tonopah and had an enjoyable meal. We never did get dinner but it was worth it - we trapped ALL the cats!

We had 16 cats at one vet and 10 at another in the AM. They were all aftercared at my place that night.

Suzie and I each loaded up 13 cats later in the morning after the traffic cleared for the long drive back to Buckeye and Tonopah. I'd be making several stops on the way back to pick up traps making the most of the drive. It had been over 200 miles of driving for each of us to fix these 26 cats. Funny, my neighbor was just bragging about the great mileage she gets on her new hybrid vehicle. I remarked, "...but one has to consider passenger miles/gallon and I win hands down!". I did feel like a freight hauler on the I-10 along with all those big trucks. I've hauled thousands of cats in the back of my Honda Element since purchasing it 2005 - over 1,500 cats this year alone.

I had an early morning trapping job on Friday AM. I'd trapped here twice before and now will only go in the early AM. I'll explain. These cats live in an alley near 20th St. and Roosevelt. It is a rather impovrished and somewhat scary area as in the evening there are all kinds of strange people milling around. Many are inebriated or otherwise "out-of-it" and they can be harassing. Once a guy called the police on me saying I was trying to trap his cat (that was not fixed and it was clear he wanted it intact).  From then on I decided mornings were better as all the usual suspects were "sleeping it off" from imbibing the night before. 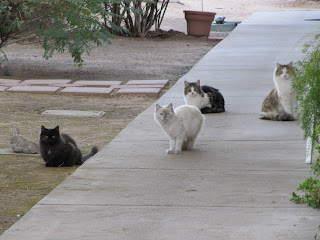 I picked up the former caregiver who lives nearby and we got to the alley at 5:00 AM. It was very cold and dark but we saw a few cats milling around. The new feeder who lived adjacent to the alley did come out and shook the food. We stayed until 8:00 AM and trapped six cats. This made a total of 24 cats trapped there so far. As it got colder, I had to sit in the car with the heat on. As I sat waiting I noticed someone coming out of her place with a load of beer cans. She threw them over the chain link fence into the alley, right near a dumpster. I thought to myself; "how could someone be so lazy so as not to put the empty beer cans in the dumpster?". Then, not but a minute later, I saw not one but two dumpster divers come through the alley and within ten minutes ALL the cans were gone! They even have special devices for picking up cans - really high-tech! This person had made their job easier by simply dumping the cans in the alley.

I made it to the vet by 8:30 AM - just in time to drop off the cats. I picked them up in the PM for aftercare. These were very lucky alley cats!

I checked out traps to four different caregivers in the morning after releasing the alley cats in the early AM. It was quiet in the alley that morning...

If you are interesting in volunteering for our TNR program, please let us know. We really need volunteers to be trap depots. Traps are stored at volunteer's homes or businesses' and checked out to caregivers who are trapping. Suzie and I both have trap depots and I never tire of checking out traps, showing people how to trap. It's always neat to see how many cats they catch with your guidance.

If you are interesting in becoming a trap depot or volunteering for the SNH please contact our volunteer coordinator Sonia Hernandez atshernandez@adlaz.org .
Posted by Pam at 7:50 AM