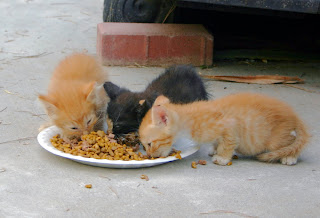 
Suzie passed this on to me so I am sharing it with you...
"I expect to pass through the world but once. Any good therefore that I can do, or any kindness I can show to any creature, let me do it now. Let me not defer it, for I shall not pass this way again." - Stephen Grellet (19th Century French writer)

Now on to this week's trapping episodes...

We released the 10 cats from Friday's fiasco back to the trailer park in the AM. We returned there with 24 traps about 6:00 PM to trap. There were five locations in this park to be targeted. The other smaller park next door would be a challenge for another time. A mysterious feeder was dumping food there and withholding food for trapping would be difficult. The park manager was very cooperative and she and her husband followed us to the various locations talking to the caregivers. Having Spanish speakers to help made things much easier.
What made this difficult was making stops at so many places to set traps, check traps, pick up traps, label traps etc. We ended up catching 23 cats that evening and overnight for the clinic in Tempe. The nice part was that the manager made dinner for us in the community center. So we dined while waiting for cats to go in traps! Suzie checked traps overnight while I headed to the clinic to work as I often do on Sundays. I took 21 cats with me to the clinic. After Sunday we will have TNR'd 33 cats in the park counting the ones fixed on Friday.


Nothing is ever predictable in this volunteer work... The next morning before releasing the cats, I had to take 11 cats in. A caregiver who trapped Sunday night arrived with extra cats, and upon reaching the clinic I discovered another caregiver with 14 cats. If 25 cats was not enough, Suzie got an early AM call from another caregiver who was turned away from another clinic because of too many cats and had to be diverted to the same clinic. And while I was there yet another person showed up, for a total of 31 cats! It took a while to check in and after this we had to release the 25 cats back to the park. Five stops again to release. By this time it was late morning and in a few hours we'd be back at the vet picking up Suzie. We picked up the diverted five cats and drove them almost to the Arizona border (Waddell), and I picked up the 11 cats to deliver them back before loading up to trap near my favorite area - 20th Ave. and Van Buren. I'd trapped there before and remembered "Buddy", a favorite feral that escaped unsterilized from my garage because the back door on the trap was not latched. I had hoped he'd find his way back but he did not. Some of these were his offspring.

I took five cats to the vet on Tuesday. That night was quiet. Suzie and Barbara were trapping on the west side but I was saving up my strength for a big job on Wednesday night.


Back at it again...I had another solo Central Phoenix trapping job for 20-25 cats. Upon showing up I realized the feral cats were coming from some apartments next door. Well, these were sort of apartments. According to the caregiver who was feeding reluctantly, this had been a horse property and the the apartments were converted stables! They sure looked like it. The source of the cats was a man who was feeding but did not sterilize his cats. It often seems people need some sex education when it comes to understanding how one cat turns in to 25 cats. I cannot remember exactly but we trapped about 17 that night and two overnight for a total of 19. I did not catch the mother as is often the case. I'll have to go back to make sure this colony is finished, if ever. In my opinion it is animal cruelty to feed feral cats and not fix them. Many feeders are not aware of this concept. Fed cats breed more often, have bigger litters, and more kittens per litter.
8/27
Checked traps in the AM and caught a few more overnight. Was at the vet at 7:00 AM to unload. I calculated that trapping say 50 cats/week required loading and unloading of cats and empty traps as well. I calculated for full traps at 21 lbs each and 5 loadings and unloadings equals moving 6,000 lbs. There are five steps in loading and unloading empty traps for a total 3,250 lbs. This is a total of 9,250 lbs or 4.63 tons of cats and traps/week or 18.5 tons/month or 222 tons/year! Anyone considering being a trapper needs to realize it requires a LOT of lifting but it is very rewarding seeing direct results of your work. It is good exercise too!
I picked up the cats for aftercare (another couple of lifting steps) and fed them in the evening. I do go through a lot of cat food - thank you Costco for your bargain on Friskies.
But before this I had two more smaller trapping jobs that night. It was 105 degrees at 6:00 PM. But the heat never stops me and I've become adapted over the years. One job was for six cats and the other for three cats. I caught all six at the one location and only two at the other. Again, one left. No luck overnight either.

Picked up the six cats in the AM as the caregiver did the trapping while I was watching traps at the other location. I then released the 19 cats from the night before. Had to leave empty traps there as I ran out of room in the Honda Element - a car perfectly designed for carrying traps and cats - and for cleaning out afterwards...then it was off to the vet with the eight cats. Picked them up for aftercare in the afternoon.

8/29 (Saturday)
Released the eight cats back at the two locations and picked up the rest of my empty traps from the big job. Saw the white female cat taunting me in the driveway. Darn it! I need to fix that cat. Lots of traps and covers to wash. All traps sterilized with bleach water and rinsed and all covers are washed with bleach between use. Anyone wanting to donate bleach, tuna, or moist cat food for aftercare, please let me know. It will be put to good use.

Next week - What we do when there are too many cats at a clinic??

Please pass the word about spay and neuter. Tame cats, often abandoned, are the source of a large number of feral cats. The Spay Neuter Hotline provides referrals for low-cost and even free spay and neuter for companion cats (and dogs). Please visit our website at:http://www.spayneuterhotline.org/
If you are feeding feral cats and need assistance, the ADLA Spay Neuter Hotline has a TNR program. Please call our hotline at 602-265-7729 (SPAY).