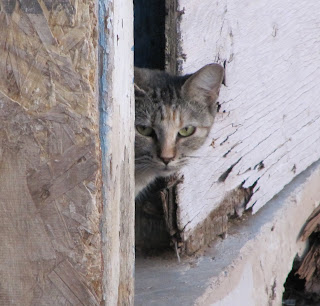 
Well, as often happens, we panicked late last week and decided we needed more cats for the clinic on 10/25 in Tempe. We were not sure a few caregivers would come through so Suzie and I went out Saturday night to trap at a vacant house near 24th St. and Roosevelt. I managed to get in touch with the caregiver to withhold food. These cats were not fed much anyway. The photo from last week's blog tells it all. This colony needed help! This week's photos are of some of the cats after they were fixed.


We trapped 17 that night and soon realized we'd have to hold the cats until Monday. Of course everyone showed up the next day as planned and the cats had to be held overnight. After working at the clinic all day we set out to trap again that night - and forgot the drop trap! We trapped one cat and one very ill kitten. We decided to leave a trap out (hidden) out overnight despite our concerns about the area and did fill it for a total of 20 cats to take in on Monday to two different vets. Later that day I had to deliver 20 traps to a caregiver I was transporting for the next day, 10/26. Then it was off again to the vacant house to trap again. We caught one cat and two cats there overnight and we think this colony is finished except for one intermittent tom. The sick kitten did die before surgery but it was a blessing. 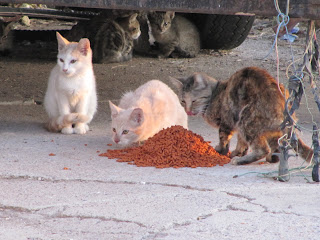 I picked up 19 cats from the other caregiver and ended up this time at three vets. Suzie helped me as it was impossible to be at three vets at once - and to pick up the two cats trapped overnight at 24th St. and Roosevelt. The other caregiver was in N.W. Phoenix. It was back to the QT once again - seems I was just there yesterday! All told we had 22 cats in between three vets that day. Suzie had a trapping job that night after we picked up at all the vets and transported the cats to my place for aftercare. I had a night off except for aftercaring the cats.


10/28
The caregiver with the 20 cats in N.W. Phoenix had two more cats to trap. Suzie had dropped off four more traps to her just in case, on her way to trap (nearby). She managed to catch one of the two cats overnight. The elusive "last cat" with a bad eye problem was out there but not going in the trap. The cat was under the trailer and came out to sniff around but no go. So, I rebaited the trap, had the caregiver shake the food, and waited in my car in the street. Round and round she went, then left, then came back - Grrrr! Then, she started into the trap and, the trap did not trip. So, with great stealth, I climbed over the fence and tip toed over to the trap and quickly bumped the door. I had her! It was off to the vet with the two last cats. This is a feeling only serious trappers can appreciate. Nirvana! As it turned out the last cat needed an eye removed and had to recover inside for a week - thank you Roni for taking care of her.


A word on elective surgeries. Often feral cats come in for S/N and the vets find serious medical conditions that are treatable. Many procedures are expensive, but without them the cats could suffer or die if left untreated. We try to raise donations to help pay for these surgeries. If you want to help with the cost of the eye removal, tail amputation, or other medical treatment for ferals, please contact ADLA either by phone at 602.273.7842 or emailor donate online and specify "feral cat medical treatment fund". We've since had two more of these conditions and they are quite expensive. Your help is appreciate.


Later that afternoon I met Suzie at the place she trapped the night before. She had trapped two cats and the third one needed to be drop-trapped. We had her (the mother cat of course) within five minutes! ...two wonderful last cat success stories this week. We love having the drop-trap in our arsenal. 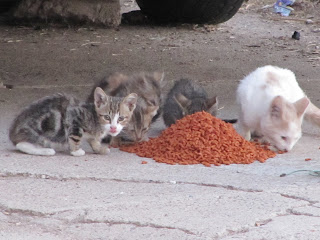 
I took the mother cat to the vet that day and Suzie aftercared and released her the next day. I'd was off that night to trap at two locations in W. Phoenix - both in 85019, one of our targeted
zip codes for TNR. I set traps at the first location and caught them immediately. Then I was off to the other closer location. I ended up with a total of eight cats at that location including that night and overnight. There were still two left so I left my drop-trap knowing these two would have to wait until Sunday's Tempe clinic if caught (It was Friday). The caregiver managed to catch them both. I helped him transfer the cats into traps later that afternoon, held them in my garage, and took them in on Sunday, 11/1.