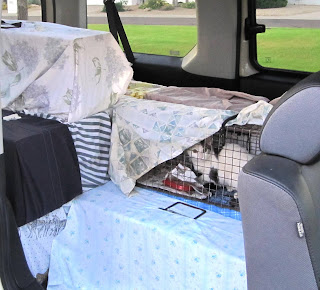 I had another successful drop-trapping on 11/21. The caregiver had been trying for a long time to catch an elusive mother cat. She had trapped all the offspring over a course of several months. I told her I'd catch that breeder, don't despair. I got to her place late afternoon on Saturday hoping to trap her for the Tempe clinic on 11/22. I set up in the backyard and positioned myself inside the sliding glass door with the drop-trap located about 10 feet away in the backyard. The caregiver had a myriad of reasons why the cat would not cooperate. I always say, "If you keep saying the cat cannot be caught it won't". Bad Juju, I guess. The fixed kittens all came to eat several times and mom circled the fence finally ending up in the front yard. I waited, and waited. Patience is the virtue one needs most to successfully catch even the most difficult to trap cats. Finally she approached and I waited and then she could not resist - she went for the bait! I'd switched to that gross, smelly, tuna and egg cat food. This is the bait of last resort when they do not respond to tuna in oil, Fancy Feast Salmon or Original Recipe Kentucky Fried Chicken (with the skin off and really warm). I had her and she'd be going with me on Sunday to Tempe. No more kittens for her!

We were able to do all the cats on Sunday despite several of us, including me, showing up with extra cats. I had Sunday night off...

That night Suzie and I set off for El Mirage to trap at yet another trailer park. We'd been to this one before and trapped close to 20 cats but it had been a while. The caregiver had been waiting since early this year for help and now it was finally time to make the trek out there. It was a pretty easy trapping at two locations in the park. We managed to have dinner at a local Mexican restaurant. We trapped 14 cats that night and Suzie made the trek back out there the next morning to pick up four stragglers for a total of 18 cats.

All 18 cats would go to one vet in the morning and returned to my garage for aftercare. One caregiver set four traps out that night hoping to get one last kitten.

We set out early to release the 18 cats and pick up any second night stragglers. Well, we caught just one, big black male. The last kitten was sitting there looking at the traps. After releasing all the cats I dropped off Suzie and took the one male cat to the vet. All told, we had trapped 16 males, two females, and one previous female (not tipped) over two nights. The vet said he had never seen this many males in one colony. They even weighed the males and the biggest came in at 18 pounds! At least those two female cats will be able to relax and enjoy life this Spring.

I made the long trip back to El Mirage at 6:00 AM on Thanksgiving morning to release the one male cat. It was cold and no one was up yet so I just released him in the yard and he took off for places unknown. There would be no Sunday clinic and no more trapping until next week. I love my Honda Element, spending many hours in it driving and listening to the XM satellite radio broadcasts. I often think of it as my home away from home. I've never had the back seats in since they day I purchased it and had cats in the back that night. I figure the passenger mileage well exceeds the Toyota Prius as rarely do I have fewer than ten cats in the back!

Right now is the time to TNR feral cats. It will not be long and kitten season will be upon us. Not only do we want to prevent kittens being born in the Spring, but the cost of surgery for female cats is less expensive this time of year. So we can save lives and save $$$ by fixing the cats now, before kitten season. To sign up for our TNR program please call our hotline at: 602-265-7729 (SPAY) or email us at feralcats@adlaz.org.