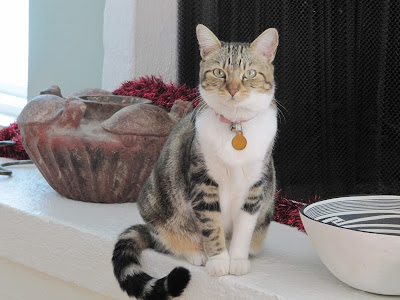 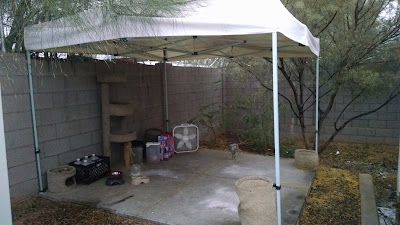 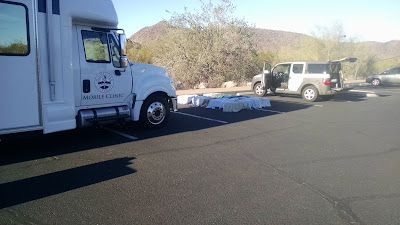 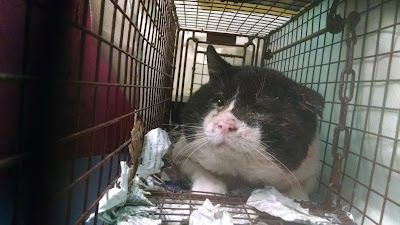 It has already been an exciting week! I was going for nine cats on Sunday evening and got 12 cats...all within 1.5 hours. The extra three cats were "the Toms" that hang out next door. Funny that so many caregivers forget to tell me about the Toms. These three were a cinch...went right in with fresh sardines. The other nine, three moms and six kittens were also very easy to catch. Had them all in less than one hour. Below is a photo of the kittens right before they were trapped. 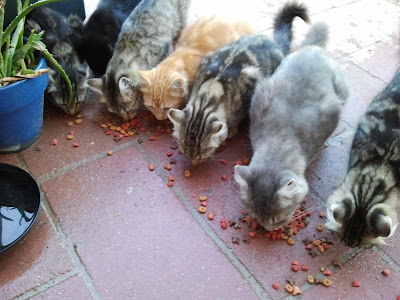 Te 12 cats were at the vet on 9/28 and I brought them home for aftercare. Later in the evening, Peaches came to pick up her cat and Angelina to drop off a cat. While Peaches was there I showed her my catch and as we looked in to the last trap there was no cat! I could see that it was the only Siamese mom cat that had escaped. Evidence showed that she had pulled in the blue blanket under the trap working its way under the rings on the Tru-Catch trap. I said YIKES! - the garage door was open. So we shut it an searched the garage - no cat. As Peaches was leaving, Angelina came and heard about my plight. I had set a trap out front already. We decided to look again as some newspapers and other stuff had fallen off the shelf in the back corner of the garage. Finally I spotted her on top of a shelf behind a storage box. The cat rodeo began! After attempts to catch her we called in the reinforcements...Bill. He armed himself with the welding gloves as we corralled her into one corner. He grabbed her by scruff and butt and dropped her into a waiting trap on its side. I immediately wired that end of the trap shut. Still I worried all night about cats escaping...all were secure in the AM.

I released them all back early the next morning...below is a photo of the early release. From there I took Angelina's cat to the vet and checked in 18 cats for S/N. thank you Dr. Anderson for being here to help fix all these cats - you are the best! 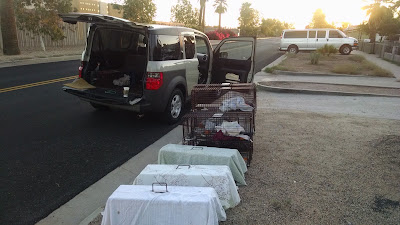 I have TNR'd over 1,400 cats so far this year.  This summer was exceptionally hot and did most of my trapping in the early morning. The swamp coolers ran continuously, struggling to keep the garage cool for the cats. Grant maintains my coolers so I always have a backup in case one fails. Thank you Grant! August 2015 had the highest average high on record in Phoenix.

I took a break in July to visit Costa Rica. The occasion was my Sister's birthday and a yoga retreat. The best part was the "resort cat" that found me and not only slept on my bed but came to our yoga classes nearly every day. I did check and this gorgeous calico cat was indeed spayed. However I saw several males at the resort with testicles! Below is a photo of "Carmen Julia" visiting out yoga class. The view out the window is of San Jose, the capital of Costa Rica. I enjoyed zip-lining, the volcanoes, hot springs and touring a coffee plantation. 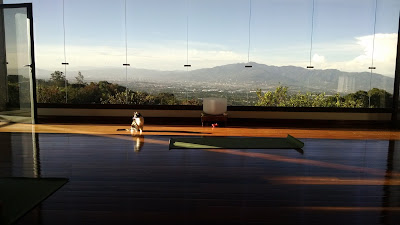 Some of the highlights of the last six months follow...

Here is one of the neatest old cats I have ever seen. He is the quintessential older male cat that needed to be fixed. He looks in bad shape but actually he was OK and got neutered and returned to a caregiver who started feeding him at her place as the neighbor did not care for him. He now has a nice place to stay, gets fed well, and has a lot of love and attention.

One special trapping comes to mind from 2014. Suzie and I were set to trap for two ladies for Dr. Kit's mobile in December. We were to meet at the first place to trap for an elderly lady with nine cats. I got there early and took the photo below. Suzie arrived 10 minutes later and I already had caught seven cats! I would like to thank Dr. Kit for hosting the free mobile clinics i 2014 for feral cats.